The Cascade – Moments in the Televisual Desert is really designed to adapt to just about any kind of space.

As a solo exhibition, all of the paintings would be included, plus one television screen (with audio) for each of the unique videos and one View-Master unit for each reel, on separate pedestals. As this is a group exhibition and our smaller space in Cambridge requires more creative arrangements, I am adapting the project to work in a contained manner. This requires a lot of planning and mock-ups that must be ready to adapt again once I’m there.

There are several possible configurations that I will discuss with Oliver in the next week. These progress largest footprint to smallest:

Three of the paintings, two video screens / televisions (one with audio), two pedestals with View-Masters and audience-interchangeable reels.

Note: the third painting (on the right) is only a placeholder to show totality. The third piece is not complete as of this posting.

The three and two WITH inclusion of the site-specific screen cap and street view images (flanking left and right).

The Two and Two with possible inclusion of the screen caps and street views, flanking left and right:

This is my preferred arrangement for Cambridge, as I suspect we will have more space than previous graduating classes, but not enough to do the Three and Two.

Two of the paintings, one video screen with audio, two View-Masters on pedestals with audience-interchangeable reels.

The Two and One with screen cap and street view stills, flanking left and right.

The most compact of the options, based on earlier arrangements I’ve seen at LUCAD’s smaller gallery spaces. I suspect we’ll have more room to do something like the Twos, but I’ve included this just to visualize it.

One painting, one video screen with audio, one View-Master on pedestal with audience-interchangeable reels. Also shows the possible inclusion of the screen caps and street views, on the left. 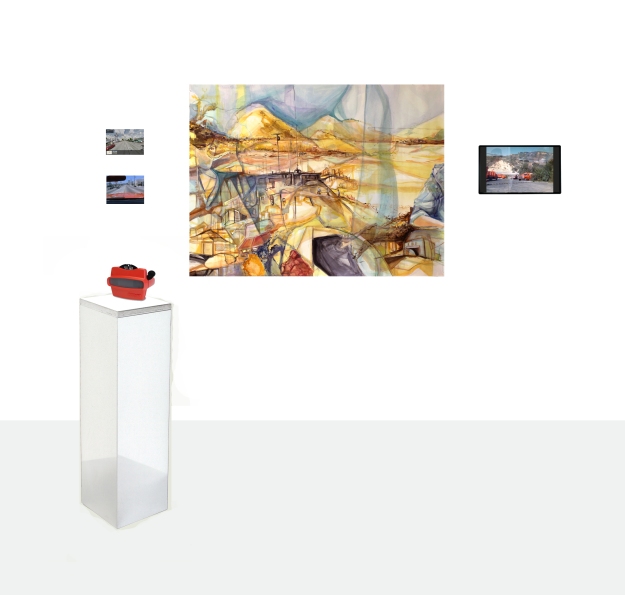