The “situated hour” referred to in my “Last Days” excerpt references Proust:

“We may, indeed, say that the hour of death is uncertain, but when we say so we represent that hour to ourselves as situated in a vague and remote expanse of time, it never occurs to us that it can have any connection with the day that has already dawned, or may signify that death — or its first assault and partial possession of us, after which it will never leave hold of us again — may occur this very afternoon, so far from uncertain, this afternoon every hour of which has already been allotted to some occupation. You make a point of taking your drive every day so that in a month’s time you will have had the full benefit of the fresh air; you have hesitated over which cloak you will take, which cabman to call, you are in the cab, the whole day lies before you, short because you have to be at home early, as a friend is coming to see you; you hope that it will be as fine again to-morrow; and you have no suspicion that death, which has been making its way towards you along another plane, shrouded in an impenetrable darkness, has chosen precisely this day of all days to make its appearance, in a few minutes’ time, more or less, at the moment when the carriage has reached the Champs-Elysées.”
― Marcel Proust, The Guermantes Way

And what is death, but change?

And what is change, but the process of process itself? The sublimation of the ordinary and extraordinary. Scary as it moves from the incomplete to the possible. Curious, lonely, lively…

My Last Days poetry manuscript deals with the space between beginning and ending, a field of stasis (perhaps, the plane in which everything actually takes place), suspended between our understanding of movement and cessation.

The space between is literally the process of existence itself. We spend nearly every moment there.

It also speaks to the indeterminate state between loss and gain, manifestation and dissolution; a mystical, shifting moment subject to physics, forensics and fantasy.

What does it mean to have, lose, gain, enjoy–to vanish or be erased? That such a weird, in-between moment can be extended and investigated also speaks to my recent visual artwork, as well as personal experiences that seem lodged in an eternal space of processing and incompleteness.

Snippets from Last Days have found their way into (and helped shape and inform) the Desert (Loss) series I completed this September and October. 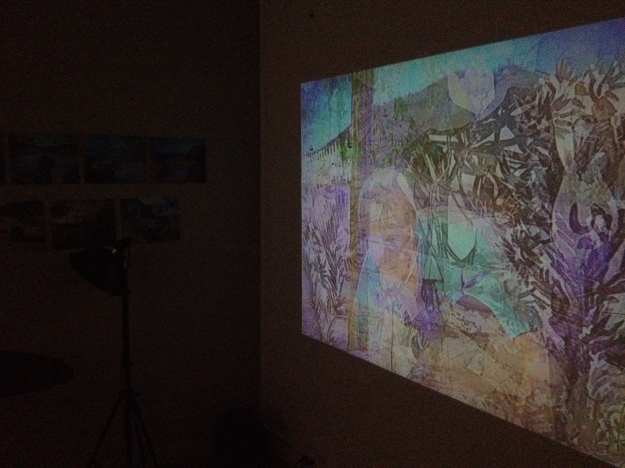 The past few days I’ve been testing projections in my studio, using my trusty new Pico pocket projector. These video manipulations constantly shift, sometimes subtly, transforming the physical environment with a rhythmic, circular sense of geography and altered space.

The on-board video processor does not allow the videos to loop seamlessly, as they were built (and intended), so I’m in the process of rounding up connectivity equipment for pulling the videos from a proper source, rather than just a USB drive with the Pico’s own processor. I anticipating having seamless versions enabled for the residency and I’ll be using a special app designed for art installations to manage the video.

I am so excited! 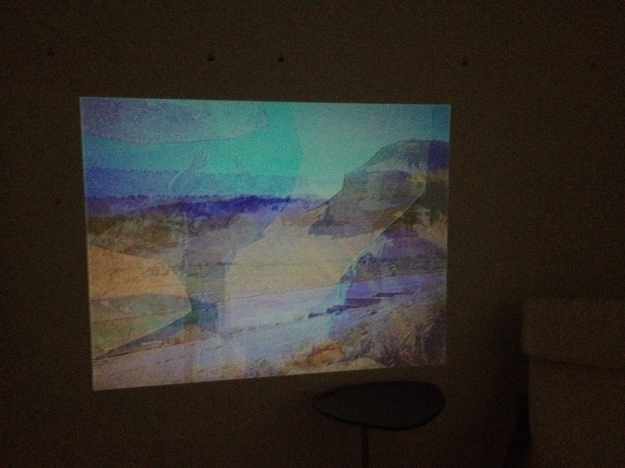 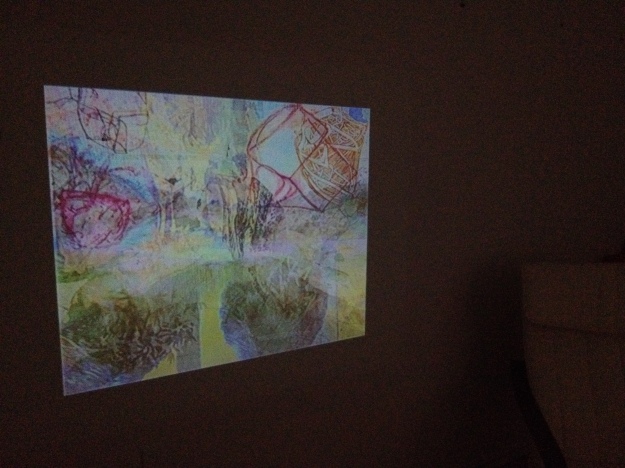 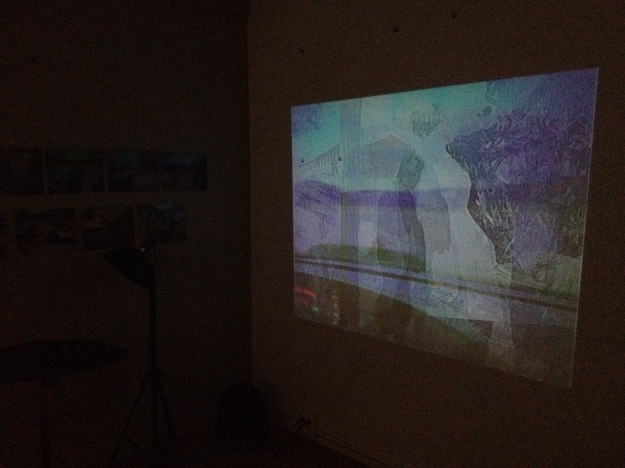 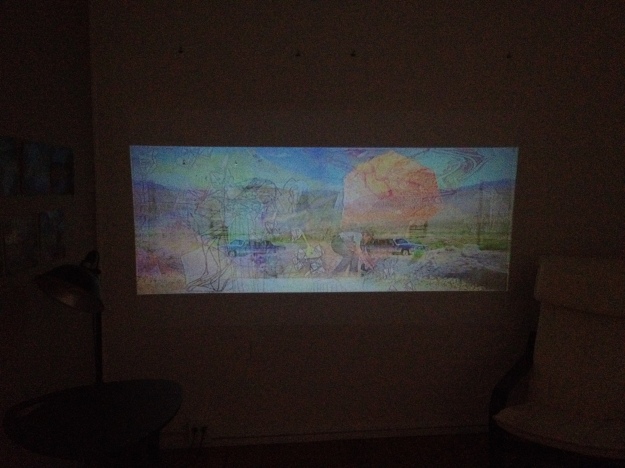 The pocket projector is limited in the size it can cast. I was able to get it up to about 70″, so for a more final version cast into the thesis exhibition space, I’ll need a beefier projector system–but overall I am very pleased with my well-researched Aaxa LED Pico Pocket Projector. So much bang for the buck!

Here’s a short clip from one of the video projections, in situ: 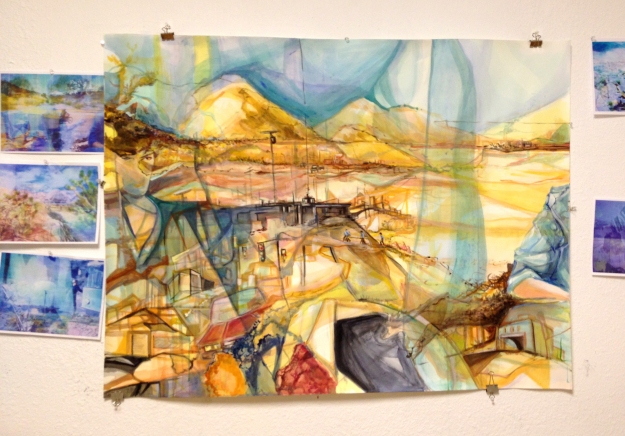 It’s finished! The photo above leaves something to be desired, so I’ll shoot some better versions when I’m able. It’s already packed and ready to head to Boston. 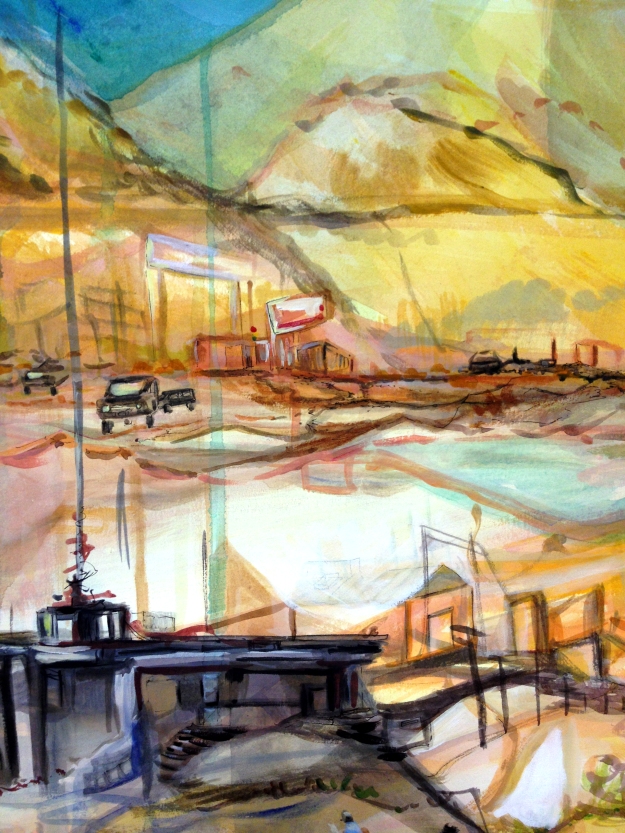 I’ll gauge whether or not additional pieces should be developed after critiques at the June residency–but this investigatory painting seems to have broken new ground that I am dying to excavate in tandem with the digital video projections and digital hybrid imaging.

It’s resolved enough to bring along for discussion, but paintings often invite revisitation, so I hesitate to call it truly “finished.” 😉

Here it was a few days before completion. The upper and lower left corners are not as resolved here:

Layers of digital manipulation, with monotype techniques, scanned, output on lustre paper, then surface manipulated with inks and paints.

Another series of manipulations, based on a still from earlier this year.

To see the entire sequence, visit the Mutations 5 gallery. 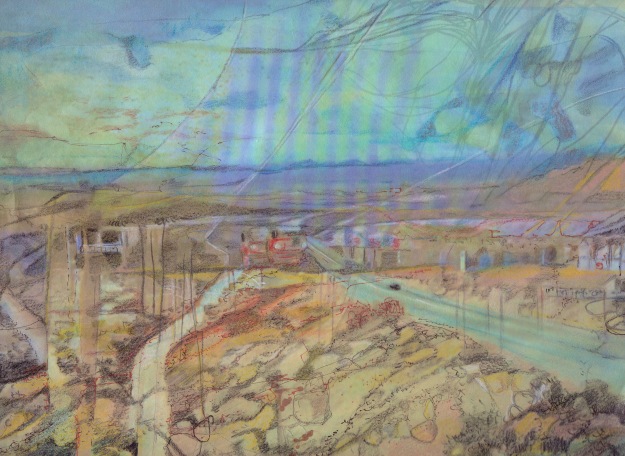 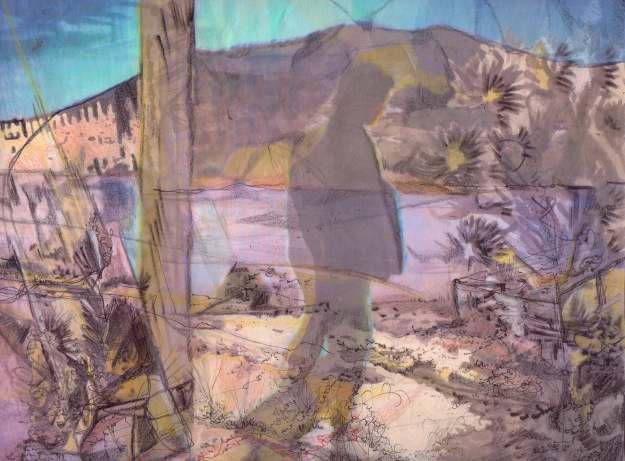