Manuports, 2012. Monoprint triptych composed of serigraphy, linocut, trace monotype, woodcut and watercolor monotype. Layers and repetition are consciously used in order to reinforce the uncovering of information and the literal repeat of architectural shapes found across the world.

Been doing a lot of productive reading and research this month–though it doesn’t take much to send me off to the library to get new material. I love it.

I’d like to highlight one text I read recently: Envisioning Information by Edward Tuft, recommended by Oliver Wasow for its relation to my existing work and potential conceptual evolution.

Envisioning Information investigates the unique conundrum of representing data, which often consists of diverse layers, in two dimensions for a three dimensional world. In fact, a high concentration of our communication, education and interaction is presented 2D, instantly losing our innate 3D relationship. 2D, in essence, is rather alien to all of us who live, breathe and interact in a fully three dimensional existence.

Tufte therefore analyzes methods of data delivery, infographics and visual representation–highlighting successful and imperfect methods (and their subsequent relations to a more philosophical consideration). Visual data has the opportunity to perform as an element of space and time itself, bending the usual 2D environment to better suit our voluminous world. It can become a pictographic narrative, a collapse of spatial points, or even a condensation of passing time into one plane.

Not doing a full review or response here, so I’ll just emphasize a few concepts I found useful for my own work.

1.) Working effectively with 2D visuals requires you to “escape Flatland” (the 2D limitations themselves). There are definite physical and conceptual problems with representing or relating data in 2D format in our complex, 3D world, so you must deeply consider methodologies that break free of Flatland’s curse. 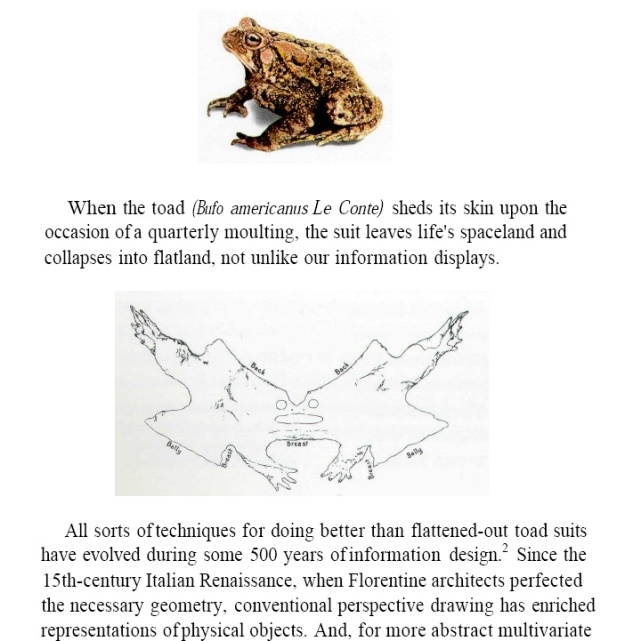 The difference between the three dimensions of the real frog, and a 2D “flatland” representation of his external form.

Paul Klee even commented on this difficulty: “It is difficult to render simultaneous dimensions.”

In fact, the relations between data and nature, expression and reception, are far more complex than 2D can ever be–and even more complex than the illusionistic use of 3D space (Tufte 5). We have to come up with good strategies, then, asking ourselves: “what specific techniques effectively document and envision multivariate worlds?” (Tufte 15).

Ideas for expanding out of the flat space include: 3D components that fold out, narrative objects like orreries (solar system models), stereoscopic viewers, movement maps.

2.) The Micro and Macro Readings of Space/Place. User-activated spaces instantly escape Flatland, allowing the viewer to investigate, assign personal meanings and reactions, or draw data back out into the real space.

A street view map of New York, for example, inhabits a number of informative layers. On one hand, anyone familiar with maps can instantly identify that it records space, location, object relationships, streets, buildings, and mileage–a macro reading that places the document first as a map, a map of a locale you may have heard of, and a virtual pinpoint of its location on a broader globe. If you live in, or have visited, a particular part of the street view map, the you can instantly employ a micro reading. Tufte also calls this “storied reading,” where the viewer investigates the “relationships between the measurements of its space and the events of the past” (Tufte 38).

The micro reading allows the participant to recognize restaurants they’ve eaten at, hotels they’ve stayed at, stores they’ve shopped at, street corners where personal stories unraveled, a breakup spot, a final goodbye, shared good news over coffee at a corner cafe. This kind of “activated meaning” takes place within the representation of the 3D space, but extends the context from street to building to map to mind.

The micro and macro, the personalized and representational: all contained in a simple, flat, 2D map: “It allows the audience to select the narrative, to recast and personalize data for their own use” (Tufte 50).

3.) Use layering and separation to visually stratify different aspects of data, in order to help deliver it clearly.

Whether delivering hard facts in a table, or providing visual clues in a painting, data does not need to be simplified or stripped–it only needs clarity. The elements and principles of art apply both to information graphics and fine art, allowing the creator to endlessly assemble and reassemble possible visual fields.

Tufte also highlighted Gyorgy Kepes The Language of Vision, where Kepes explores the nature of Eastern philosophy and its application to visual art–a field of interest that’s folded deeply into my own work. Tufte is interested in the way Eastern visual culture recognizes the important role of empty space in the image, identifying it as a play of “living and dead” communications–some images or passages are alive, others are dead or unformed, ready to manifest.

He relates this approach to the way we can arrange elements in a design, to achieve the best data delivery, no matter what the data. A visual should neither be stripped of all content, nor cluttered to the point of confusion. For him, logical layers imply three dimensionality, include the empty space component and also allow for “effective deployment of redundant signals” (Tufte 94), which itself reminds me of well-placed rhythmic variables.

Layers and repetition function similarly in my work, as in the piece above (Manuports).

Envisioning Information was brimming with mind-sparking concepts, many more than I’ll fit here (for the sake of clarity). 😉 It’s an excellent addition to my conceptual arsenal and I’ll be trying a few more experiments based on the micro / macro idea.