Videos include sound (lots of subtle layers, too, so turn up the volume if you can!) 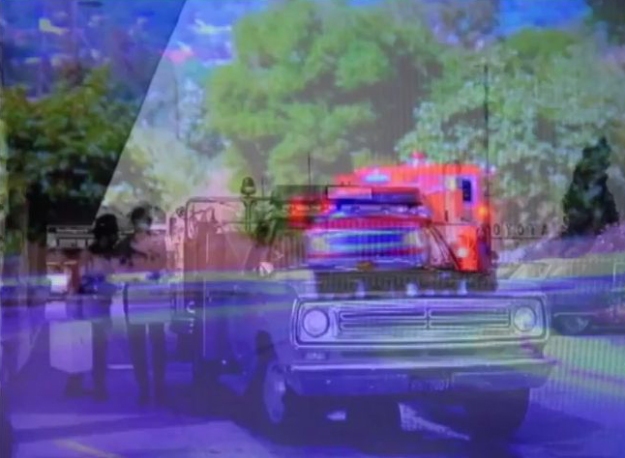 Please note–Elevator is not functioning inline, so please visit my website to view the video.

Peter Rostovsky suggested I consider new ways of dimensionalizing the television experience (which I applied to consideration of the dimensional nature of real and constructed space; in this case, the California landscape as mediated by now-historical television).

I collapsed, condensed, mutated, fabricated and re-contextualized images that were formerly stills. Suddenly things were moving, deepening and expanding my dimensional palette. Elements were disintegrating, breathing, dancing–full of renewed agency. My landscapes were alive–and they weren’t just looping!

I treat the video work the way I handle the creation of digital images (and painting). I develop and respond, investigate and rebound.

During this process of bound and re-bound, certain characters entered the elastic-space as freshly refined icons. I was intrigued by their presence and obsessively pursued their emerging “selfhood.” It made me think of how, in the beginning, I only wanted the bare landscape in my digital desert. I had originally dumped precision details, but vehicles, individuals and even interior spaces crept into the mix. As Tony Apesos pointed out, I’m repopulating the gradually-emptied landscape phenomena, which has been losing specific objects and people since the 16th century. It’s curious, potentially frightening (and exhilarating).

The inclusion of people as part of the video cadence also flirted with narrative, which, as many of you know, has always been intentionally elusive or denied. Here I emphasized the almost-narrative by allowing moments to rhythmically rebound, but keeping with my larger concepts, the resolution of story is always denied.

I’ve been reading a ton of television theory and I’ve discovered fascinating ways of digging into the idea of mosaic and montage, implied space and the passage of time. Each video is intentionally meta-referential. Certain clips, moments and colors are allowed to cycle, forming choruses that seem familiar, yet always shift. Just past the bridge (thinking in musical terms here), a set of layered clips are allowed to temporarily emerge, only to fall away without returning.

The sound is a carefully composed layered blend of recordings I did on a Zoom Microtrack, combined with television audio and ambient noise.